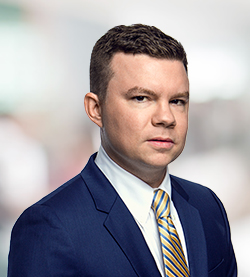 Mr. Cash serves in the role as of counsel with Levin Papantonio. He takes great pride in representing everyday people who have been hurt through the wrongdoing of others, and he finds satisfaction in helping his fellow citizens petition the courts for justice. He believes our American system of law and government is the greatest in the world and feels privileged to hold open the courthouse door for all. Mr. Cash has represented clients at all levels, from the small claims court to the Supreme Court of the United States.

Mr. Cash represents people wrongfully injured across the United States. He concentrates his practice mainly in the areas of products liability, including pharmaceuticals and other consumer products.

He also handles wage and hour cases, assisting employees who have been shortchanged through the unfair pay practices of their employers. This includes not paying for time actually worked, not paying the minimum wage, intentionally misclassifying employees as independent contractors or exempt from the overtime laws, and other illegal practices. He is proud to represent in court those employees who are cheated out of their hard-earned pay and who cannot stand up for themselves.

Mr. Cash’s legal interests include advanced discovery strategy, complex civil procedure, intellectual property litigation, electronic discovery matters, expert testimony under Rule 702 and the Frye/Daubert standards, attorney ethics, and appellate practice. In 2015, in the West Virginia Supreme Court, he successfully argued in favor of a position that strengthened the ethical standard for all attorneys in that state. The high court adopted his position unanimously over the objection of two other parties. Rich v. Simoni, No. 14-0998 (W. Va. Apr. 10, 2015).

Mr. Cash is a graduate of Capital University Law School in Columbus, Ohio, where he twice represented Capital on its National Moot Court Team. He also served two years on the Capital University Law Review, including one year on the executive board as the research editor. Also during law school, he held internships with two federal judges, the Hon. U.S. Circuit Judge Jeffrey S. Sutton and the Hon. U.S. District Judge Algenon L. Marbley, as well as served as research assistant to Prof. Bradley A. Smith, whom President Clinton appointed to chair the Federal Election Commission.

Mr. Cash has been interviewed by National Public Radio’s All Things Considered, Law360, and print and television media in Florida and elsewhere. He regularly speaks on pharmaceutical litigation at national conferences for attorneys who represent injured patients.