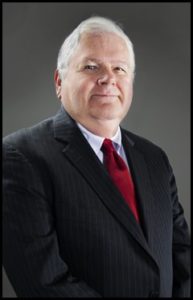 Gary Jackson is a name many attorneys in North Carolina know. He has been president of the NC Advocates for Justice and has held leadership positions in several other national and state organizations.

Gary is frequently asked to speak throughout the country at educational programs for lawyers and he regularly authors articles addressing current legal trends and developments.

He has won many awards over his 35+ years as a trial lawyer – 22 of which have been spent fighting for plaintiffs in numerous multi-million dollar claims. North Carolina Super Lawyers magazine has designated Gary a “North Carolina Super Lawyer1” every year since 2006 for Class Actions and Mass Torts. In 2013, 2014, and 2015 he was designated one of the “top 100 lawyers in North Carolina1” and in 2013 and 2015 among the “top 25 lawyers in Charlotte1”. Gary has been recognized by Business North Carolina as a “Legal Elite2” in 2003, 2004, 2008, and 2013. He is a charter fellow of the Litigation Counsel of America, and holds an AV pre-eminent rating (the highest peer-review rating) from Martindale-Hubbell3.