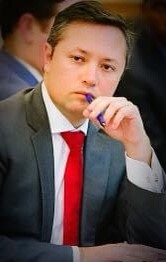 Mr. Chanez is a partner at Mitchell Sanchez in New Orleans, Louisiana. He holds an LLM from Queen Mary University in London. Has practiced law in the United Kingdom, European Community, and United States of America. He is also Fellow of the American Board of Trial Advocates’ program at Harvard Law School. He is a part of the National Trial Lawyers Top 40 Under 40.

In 2005, Mr. Chanez earned his Bachelor of Arts degree in Political Science from Tulane University and was a member of the Alpha Sigma Lambda Honor Society, the Pi Sigma Alpha Honor Association, and the Pi Alpha Beta National History Honor Society. In 2009, he earned his Juris Doctor from Loyola University New Orleans College of Law where he graduated with honors. In 2010, he earned his Masters of Law (L.L.M.) with Merit Honors from Queen Mary University in London, UK with a specialization in Antitrust Law. He is fluent in English and Spanish and is currently learning French.