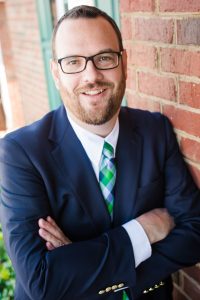 Jesse Van Sant’s practice focuses exclusively on helping people who have been injured due to the negligence of others, with a special emphasis on nursing-home neglect. Before joining Eric J. Hertz, PC, Mr. Van Sant primarily represented insurance companies and local governments on the defense side in personal-injury litigation, civil-rights litigation, and appellate matters, and he also gained extensive litigation and trial experience on the plaintiffs’ side in the areas of medical malpractice, nursing-home neglect, and personal injury.

Originally from Dunwoody, Georgia, Mr. Van Sant received his Juris Doctor degree in 2007 from the University of Georgia School of Law, where he finished as a Robert E. Knox Scholar. He was named a 2016-2018 Georgia Rising Star by Super Lawyers magazine and has been invited to speak at legal seminars sponsored by the State Bar of Georgia and several public risk-management organizations. He has also served as the prosecutor for the Magistrate Courts of Forsyth County and Cherokee County, Georgia, and he has contributed to law review articles on topics relating to the doctrines of qualified immunity and official immunity in actions against government employees.