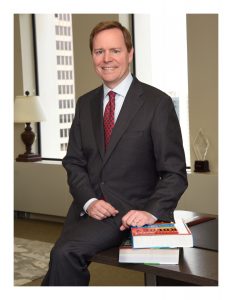 Lloyd Bell is an experienced medical malpractice and catastrophic injury trial attorney, who has been lead counsel in over 75 civil jury trials over his 25-year career. Mr. Bell is a member of The Inner Circle of Advocates, an invitation-only group limited to 100 of the leading plaintiffs lawyers in the United States.

After graduating with honors from the Virginia Military Institute, Mr. Bell attended Mercer University Law School where he graduated in 1992. Upon graduation, Mr. Bell began his legal career in U.S. Army JAG Corps, serving four years on active duty, first as a prosecutor and later as defense counsel, where he represented soldiers accused of felony crimes. Mr. Bell received an Honorable Discharge, and then entered private practice working for several large insurance defense law firms. He founded his own firm – Bell Law Firm – in 1999, and since that time, has dedicated his practice exclusively to representing people who have suffered serious injury or wrongful death due to medical malpractice and other catastrophic events. Mr. Bell has developed a particular expertise in representing people who have suffered catastrophic brain and spinal cord injury.