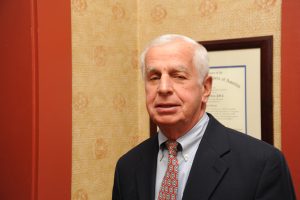 During his career, Peter Perlman has worked toward making a safer society by challenging defective and dangerous products. His cases have received national exposure, and he has won more than 60 multimillion-dollar verdicts and settlements on behalf of his clients.

On April 27, 2017, Peter was inducted into the “National Trial Lawyer Hall of Fame” at ceremonies held in Las Vegas. This honor is presented to five individuals “who have defended the right to trial by jury as well as the integrity of American jurisprudence with their exceptional actions in the courtroom throughout the United States.”

He has served as a former President of AAJ, Public Justice, the Civil Justice Foundation, and the Litigation Counsel of America. The “Peter Perlman Outstanding Trial Lawyer Award” is given annually by the Kentucky Justice Association. He has received the highest honors given by many national trial lawyer organizations, including the AAJ “Leonard Ring Champion of Justice Award”; the Kentucky Justice Association Lifetime Achievement Award (the only person to be so honored); and the Fayette County Bar Association annual “Henry T. Duncan Lifetime Achievement Award.” In addition, he received the “Compassionate Gladiator Award” from the Florida Justice Association.

He has been inducted into many invitation-only professional associations including the Inner Circle of Advocates, International Academy of Trial Lawyers, International Society of Barristers, American Board of Trial Advocates, and the Melvin M. Belli Society. He also served two terms as a Trustee of the National Judicial College.

The Southern Trial Lawyers Association has honored Peter with its “Warhorse Award” and with the prestigious “Tommy Malone Great American Eagle Award.” Additionally, he was the 2015 recipient of the “W. McKinley ‘Mickey’ Smiley, Jr. Lighthouse Award.”

He has written many publications including Opening Statements Annotated. Peter served as an adjunct professor at the U.K. College of Law for 25 years, and has been inducted into the Law School Hall of Fame. His endowment has provided scholarships for 40 students. He has also established memorial scholarship funds arising out of successful litigation.

In 2015, Peter was inducted into the University of Kentucky Hall of Distinguished Alumni.

Peter serves on the Board of the National Chorale at the Lincoln Center. The National Chorale is devoted to inspiring diverse audiences through education and performance, and increasing awareness of music’s power to engage and inform through artistic expression.

In his community and state, Peter has been involved in numerous charitable activities. He chaired a fundraising effort to build a specialized playground for handicapped children at Cardinal Hill Children’s Hospital in Lexington. He was president of Junior Achievement, and has served on many civic boards.

Peter is married to the former Lana Coyle. They have three daughters: Pam, Patrice and Penne, four grandchildren, and an American Eskimo dog named Puff.